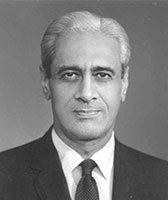 Satish Dhawan was an Indian mathematician and aerospace engineer, widely regarded as the father of experimental fluid dynamics research in India. Born in Srinagar, he was educated in India and the United States. Dhawan was an eminent researcher in the field of turbulence and boundary layers, and led the development of the Indian space program, serving as Chairman of the Indian Space Research Organization (ISRO) from 1972-1984.

Dhawan was a graduate of Punjab University in Lahore, India (now Pakistan) where he completed two bachelor’s degrees: one in physics & mathematics and one in mechanical engineering. He also earned a master of arts in English literature while at Punjab. In 1947, he completed a master of science in aerospace engineering at the University of Minnesota, and an aeronautical engineering degree from the California Institute of Technology. He continued his studies at Caltech and in 1951, he completed a double PhD in mathematics and aerospace engineering under his advisor, Dr. Hans W. Liepmann.

Soon after, he returned to India and joined Bengaluru’s Indian Institute of Science (IISc) as a senior scientific officer, ultimately becoming the head the department of aeronautical engineering. Under his stewardship, the department quickly became the epicenter of experimental fluid dynamics research in India. By 1962, he was the Director of IISc. He was the youngest person ever appointed to the position and remains the institution’s longest-serving director.

While on sabbatical at Caltech in 1971, Prime Minister Indira Gandhi called on Dhawan to return to India to take charge of the Indian space program following the sudden death of Vikram Sarabhai. Dhawan acquiesced with two conditions: that the headquarters of the space program be in Bengaluru and that he be allowed to continue as Director of IISc. Gandhi agreed to both and he returned to India in May of 1972 becoming Chairman of the Indian Space Research Organization (ISRO), Chairman of the Space Commission, Secretary to the Government of India in the Department of Space, while also retaining his Directorship at IISc.

Despite that workload, he continued to devote substantial effort to boundary layer research. His most important contributions are included in the seminal book Boundary Layer Theory by Hermann Schlichting. Additionally, he set up the country's first supersonic wind tunnel at IISc and pioneered research on relaminarization of separated boundary layer flows, three-dimensional boundary layers and trisonic flows.

A lifelong committed educator, Dhawan carried out pioneering experiments in rural education, laying the groundwork for millions of illiterate people in remote parts of India to gain access to an education via a satellite devoted exclusively to long-distance learning. He died in January, 2002, in Bangalore. ISRO launched the world’s first satellite uniquely dedicated to education in 2004.