Paco A. Lagerstrom Lecture in Aerospace

The lecture is given to honor the memory of Paco A. Lagerstrom (1914-1989), Professor of Aeronautics, 1952; Professor of Applied Mathematics, 1962; Emeritus, 1981; and a faculty member of GALCIT from 1946 to 1981. He is known for his pioneering work in applying the method of asymptotic expansion to fluid mechanics problems.

The Paco A. Lagerstrom Lecture is made possible through a generous gift from Caltech Alumni Drs. Jain-Ming (James) Wu (MS’59, PhD’65 Age) and Ying-Chu Lin (Susan) Wu (PhD’63 Ae) who carried out their doctoral research in GALCIT. Through this lecture they honor a professor who has made significant impact in their lives.

The Interplay of the Concrete and General: from Mathematics to the Brain

The need to solve a concrete problem of physical significance occasionally leads to the development of a new mathematical technique. It is often realized that this technique can actually be used for the solution of a plethora of other problems, and thus it becomes a mathematical method. Problems arising in fluid mechanics have historically played a crucial role in the emergence of several methods in Applied Mathematics. The birth at Caltech of the department of Applied Mathematics from the department of Aeronautics provides a clear illustration of the above fact. In this lecture, a review will be presented of how a problem posed by the late Julian Cole, who was the first (joint) student of the late Paco Lagerstrom, led to the development of the so-called "Unified Transform." This method has been acclaimed by Israel Gelfand as, "the most important development on the exact analysis of PDE since the work of the classics in the 18th century." Remarkable connections with the Riemann hypothesis, as well as the development of several effective algorithms for Medical Imaging will also be reviewed. Regarding the latter, it should be noted that Mathematics provides a marvelous illustration of the innate ability of the brain to learn and to create using associations and generalizations, which forms the basis of abstract thinking. The role of the above brain imaging algorithms for elucidating underlying neuronal mechanisms will also be briefly discussed. 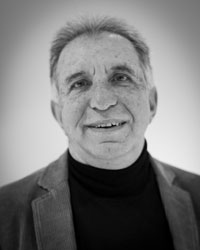 A.S. Fokas received a BSc in Aeronautics from Imperial College (1975); he obtained a PhD in Applied Mathematics from Caltech (1979), and a MD from the University of Miami, School of Medicine (1986). In 1986, he was appointed Professor and Chair of the Department of Mathematics and Computer Science of Clarkson University, USA. In 1996, he was appointed to a Chair in Applied Mathematics at Imperial College, UK. In 2002, he was appointed to the newly inaugurated Chair in Nonlinear Mathematical Science at the University of Cambridge, UK. In 2000, he was awarded the Naylor Prize, the most prestigious Prize in Applied Mathematics and Theoretical Physics in UK. He was awarded the Aristeion Prize in Sciences of the Academy of Athens, as well as the Excellence Prize of the Bodossaki Foundation. He has received honorary degrees from six Universities and also has been decorated as the Commander of the Order of Phoenix by the President of the Hellenic Republic. In 2009, he was selected as Guggenheim Fellow. He is the first ever Applied Mathematician to be elected a full member to the Academy of Athens. He is a Professorial Fellow at Clare Hall, Cambridge. He is the author or co-author of three monographs and more than 250 papers, as well as the co-editor of seven books. ISI Web of Science includes A.S. Fokas in the list of the most highly cited researchers in the field of Mathematics.