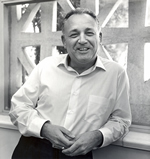 This lecture is given in honor and memory of Lester Lees (1920-’86), Professor of Aeronautics and Environmental Engineering and a faculty member of GALCIT from 1955 to 1985. He made pioneering contributions in hypersonic aerodynamics and environmental quality science, notably in boundary layers and heat transfer, flow-over blunt bodies, and the development of reentry vehicles.

The Lester Lees Lecture in Aerospace is made possible through a generous gift from Caltech Alumni Drs. Jain-Ming (James) Wu (MS’59, PhD-65 Ae) and Ying-Chu Lin (Susan) Wu (PhD’63 Ae) who carried out their doctoral research in GALCIT. Through this lecture they honor a professor who has made significant impact in their lives.

Lester Lees lived at the right time for a man of his talents, ability, vision, and drive to be a decisive factor in the development of the science of hypersonic gas dynamics. At Princeton, he and his colleague Luigi Crocco and his students formed a group from which came the early seminal contributions in the field. At Caltech, he continued this tradition with a large number of students who have populated academia and industry in key positions. His life and work as a man and a scientist will be presented, honoring his seminal contributions to hypersonics and environmental quality science.

In hypersonic flow, aerodynamic heating is often the main enemy. Transition from laminar to turbulent boundary layer flow causes the heating rate to increase by a factor of four and adds critically to the drag. The location of the transition point is therefore crucial in vehicle design. The T5-group at Caltech made the surprising discovery that vibrational and chemical relaxation can cause a dramatic delay of transition on slender hypersonic vehicles. A second important effect, suggested by theoretical work by Fedorov, and demonstrated experimentally in the T5 hypervelocity shock tunnel is that fine blind wall porosity can act in the same favorable manner.

Hans G. Hornung received his bachelor (1960) and master (1962) degrees from the University of Melbourne and his Ph.D. (1965) in Aeronautics from Imperial College, London. He worked in the Aeronautical Research Laboratories, Melbourne (1962-‘63, and 1965-‘67), and in the Physics Department of the Australian National University (1967-‘80), with a sabbatical year as a Humboldt Fellow in Darmstadt, Germany in1974. In 1980, he accepted an offer to head the Institute for Experimental Fluid Mechanics of the DLR in Goettingen, Germany. He was appointed the C. L. “Kelly” Johnson Professor of Aeronautics and the Director of the Graduate Aeronautical Laboratories at Caltech in 1987 and has been Emeritus since 2005. He has made pioneering contributions in gasdynamics, notably in Mach reflection and effects of dissociation, in separated flows, and in wind tunnel technology. He received the Ludwig Prandtl Ring in 1999 from the German Aerospace Society (DGLR), and is a Fellow of the Royal Aeronautical Society, of the American Institute of Aeronautics and Astronautics, and of the American Association for the Advancement of Science. Together with three colleagues, he received the ICAS von Karman Award for international cooperation in aeronautics in 1988. In 2011, he received the AIAA Fluid Dynamics Award. He was elected as a foreign member to the Royal Swedish Academy of Engineering Science in 1991 and as a foreign associate to the U.S. National Academy of Engineering in 1997.