The lecture series Distinguished Women in Aerospace celebrates the contributions and accomplishments of pioneers and leaders in academia, government and industry to the field of Aerospace Engineering and Sciences.

Dr. Sandra Magnus served 16 years in the NASA Astronaut Corps. She flew two shuttle missions to the International Space Station and served on the ISS as a member of Expedition 18 to 4.5 months. "Perspectives from Space" encompasses stories, experiences, and insights gained over her years as an astronaut.

Executive Director of the American Institute of Aeronautics and Astronautics (AIAA) 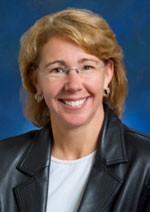 Dr. Sandra H. “Sandy” Magnus is the Executive Director of the American Institute of Aeronautics and Astronautics (AIAA), the world’s largest technical society dedicated to the global aerospace profession. Originally from Illinois, Dr. Magnus holds degrees from the Missouri University of Science and Technology (BS 1986, MS 1990) and Georgia Tech (Ph.D. 1996). Before joining NASA in 1996, Dr. Magnus worked for McDonnell Douglas as a stealth engineer. She was selected to the NASA Astronaut Corps in 1996, flew in space on the STS-112 shuttle mission in 2002 and was on the final shuttle flight, STS-135, in 2011. In addition, she flew to the ISS on STS-126 in November, 2008, serving as flight engineer and science officer for the duration of her stay. Since her return she has also worked at NASA Headquarters in the Exploration Systems Mission Directorate and as Deputy Chief of the Astronaut Office.