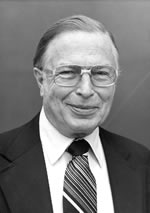 This lecture is given to honor the memory of Ernest E. Sechler (1905-'79), Professor of Aeronautics and a faculty member of GALCIT from 1930 to 1976. He made pioneering contributions in aerospace structures, notably in the design of safe, lightweight structures, including airplane fuselages and thin shells of rockets and boosters.

The Ernest E. Sechler Lecture is made possible through a generous gift from Caltech Alumni Drs. Jain-Ming (James) Wu (MS'59, PhD'65 Ae) and Ying-Chu Lin (Susan) Wu (PhD'63 Ae) who carried out their doctoral research in GALCIT. Through this lecture they honor a professor who has made significant impact in their lives.

Response and Stability of Structures with Lüders-Like Material Behavior

Lüders banding is a dislocation driven phenomenon that leads to a material instability that results in macroscopic localized plastic deformation, which in low-carbon steels can be 1-4%. This lecture will discuss how such material instabilities interact with structural instabilities leading to unexpected response and possible collapse of structures. In particular, bending experiments on tubes have shown that Lüders banding interacts with wrinkling and ovalization resulting in the coexistence of two curvature regimes. Depending on the tube D/t and the extent of the Lüders strain, the higher curvature zone can either spread throughout the structure, when uniform curvature bending resumes, or lead to collapse. It will be demonstrated that Lüders banding can be modeled with an elastic-plastic constitutive model with an “up-down-up” stress-strain response. Numerical simulations of tube bending result in the nucleation of localized banded deformation that propagates along the length of the structure while the moment remains essentially unchanged. The Lüders-deformed section has a higher curvature, ovalizes more than the rest of the tube, and develops wrinkles with a characteristic wavelength. The conditions under which the localization leads to collapse will be discussed. The lecture will finish with an outline of the effect of macroscopically similar localized deformation that can occur during bending of shape memory alloy tubes in the pseudoelastic temperature regime.

The University of Texas at Austin 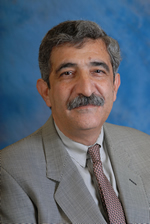 Stelios Kyriakides received his B.Sc. degree in Aeronautical Engineering with first class honors in 1975 from the University of Bristol in the U.K., and graduate degrees in Aeronautics, with specialty in the mechanics of solids, from the California Institute of Technology (M.S. 1976, Ph.D. 1980). He joined the University of Texas at Austin in 1980, where he currently holds the Cockrell Family Chair in Engineering No. 10 and is the Director of the Research Center for Mechanics of Solids, Structures and Materials. His work is motivated by practical problems and usually involves combined experimental, analytical and numerical efforts. He has published more than 200 technical articles, one book and one monograph. His contributions include plastic buckling and crushing of structures, manufacturing forming problems, localization and failure, mechanical behavior of composites and cellular materials, and plasticity. He served as chair of the Executive Committee of the Applied Mechanics Division-ASME, as President of the American Academy of Mechanics, and presently is vice-chair of the US National Committee of Theoretical and Applied Mechanics, member of the Congress Committee and General Assembly of IUTAM, and is Editor of the International Journal of Solids and Structures. His recognitions include the Presidential Young Investigator Award and the Koiter Medal of the ASME. He is a Fellow of the ASME and of the American Academy of Mechanics and a member of the National Academy of Engineering. In 2009, he received Docteur Honoris Causa from the Institut National des Sciences Appliquées de Lyon, France.