The lecture is given to honor the memory of Edward E. Zukoski (1927-1997), Professor of Jet Propulsion and Mechanical Engineering, a GALCIT faculty member from 1956 to 1995. He is known for his pioneering research on the science and technology of combustion.

The Edward E. Zukoski Lecture is made possible through a generous gift from Caltech Alumni Drs. Jain-Ming (James) Wu (M.S. ‘59, Ph.D. ‘65 Ae) and Ying-Chu Lin (Susan) Wu (Ph.D. ‘63 Ae) who carried out their doctoral research in GALCIT. Through this lecture they honor a professor who has made significant impact in their lives.

Fire protection standards have largely been developed to date by conducting large-scale fire tests. These standards are not fixed and have to be updated as buildings, materials, and industrial facilities evolve. Tall buildings, atriums, high ceilings, dense automated storage, numerous plastics, energy efficient construction, and other features challenge traditional approaches to fire protection design. Often fire protection testing becomes prohibitively expensive or impossible to conduct at actual scale in the existing fire testing facilities. In this situation the development of predictive physics-based models, describing fire growth behavior and associated fire protection requirements is thought of as a needed alternative or a complement to testing. It is envisioned that this modeling capability will take the form of numerical codes simulating the relevant fluid mechanics, heat transfer, and combustion. The strategic fire modeling effort at FM Global consists of two main objectives: fire growth and water-based fire suppression. This multi-physics modeling is extremely challenging in its scope and in the range of scales involved. On the fire growth side the model should describe: buoyant turbulent flow, laminar and turbulent combustion, soot formation, radiation, solid fuels pyrolysis, melting, reactive wall flows, and all modes of heat transfer. On the suppression side the model should tackle: sprinkler spray and water mist formation, water spray transport and its interaction with fire plume, radiation scattering and absorption by droplets, droplet impingement on solid fuels and splashing, water transport on solid surfaces, wet fuel pyrolysis, fire suppression, and gas phase flame extinction. The progress and challenges of this modeling effort will be discussed. 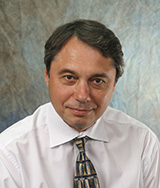 Sergey Dorofeev received a M.S. degree in physics and engineering from the Moscow Institute for Physics and Technology in 1980. He obtained his Ph.D. in 1982 and D.Sc. (Habilitation) in 1990; both degrees were in chemical physics, from I. V. Kurchatov Institute of Atomic Energy, Moscow. He worked at the Kurchatov Institute, from 1980 to 2001 on various combustion problems including fires, explosions, blast waves, as well as safety of processes industries. From 2001 to 2004 he worked at the Research Center Karlsruhe, Germany leading several projects on hydrogen safety in the nuclear and automotive industries. He joined FM Global in 2004 where he led strategic research on explosions, fire modeling, and fire protection. His work is motivated by practical problems and involves large scale and laboratory experiments combined with analytical and numerical methods. He serves on the Board of Directors of the Institute for Dynamics of Explosions and Reactive Systems, and on the editorial boards of Combustion and Flame, Proceedings of the Combustion Institute, and Shock Waves. His recognitions include Certificate of Appreciation from US Nuclear Regulatory Commission (1996), R. I. Soloukhin Award from the Institute for Dynamics of Explosions and Reactive System (2003), and Risk Innovator Award from the Risk and Insurance Magazine (2013).