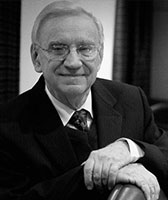 Ozires Silva (born January 8, 1931) is the founder of Embraer, the world’s third largest manufacturer of commercial jets. As one of the first generation of executives who built world-class competitive enterprises in Brazil, he led the way for today’s impressive roster of Brazilian CEOs, and has since played leading roles in both government and academia.

Silva was born in Bauru–São Paulo state. He graduated from the Escola de Aeronáutica do Campo dos Afonsos in Rio de Janeiro as a military pilot. He then served in the Brazilian Air Force for four years in the Amazon rainforest region. In 1962, Silva graduated from the Aeronautics Technological Institute as an aeronautical engineer. He went on to earn a master’s degree in aerospace engineering from the California Institute of Technology in 1966. Afterwards, he was immediately hired by the Brazilian General Command for Aerospace Technology where he would become part of the Brazilian Institute of Air and Space. He soon became the lead engineer of the Bandeirante project: a turboprop plane designed for both civilian and military purposes.

The first Bandeirante prototype flew in October, 1968. Subsequently, Silva attempted to convince private industry to produce the Bandeirante without success. Undaunted, his role in the development of Embraer continued as both an inventor and an entrepreneur. He led the aeronautical design team that developed a new regional transport plane and built the first prototype. In 1969, when he could not find an established company in Brazil willing to manufacture the plane, he persuaded the Brazilian government to set up Embraer and he served as the CEO of the company until 1986. During that period, the company designed, developed and launched into production 12 models of military and civilian aircraft, built a global supply chain, and achieved international certification and market acceptance.

In 1986 he was appointed President of Petrobras, Brazil’s largest oil company, and then, in 1990 he joined the government as a Minister of State for Infrastructure, covering the areas of telecommunications, energy, transportation, mining and metallurgy. During his 15 month tenure, he laid the groundwork for the privatization of the maritime ports and bolstered companies that improved the logistics of distribution throughout Brazil. Most importantly, he set himself to correcting the huge inequity in communications. With only 2 of 150 million Brazilians having a phone at the time, Silva threaded a needle in existing law to provide for the rapid expansion of cellular technology in Brazil, bypassing the need for landlines. He also expanded zipcodes to make deliveries and accessibility to deliverables easier for everyday Brazilian citizens.

He returned to Embraer as CEO from 1991 to 1995 to oversee the arduous process of privatization. As the founder of the company, now with a proven record of negotiating governmental roadblocks, he managed to do it. He subsequently served as President and CEO of Varig Airlines from 2000 to 2002. He went on to academia, serving as the Dean of Unimonte, a private university in Sao Paulo. He serves on numerous boards and leadership organizations. He is the author of five books on entrepreneurship, education and the aviation business.